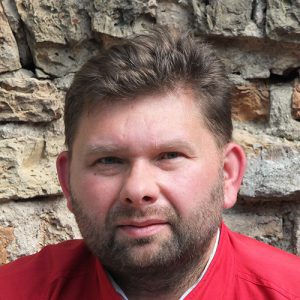 Born in Częstochowa in 1968, he is a graduate of the Fryderyk Chopin Music Academy in Warsaw, where he studied the cello (with Andrzej Wróbel, diploma in 1992) and composition (with Marian Borkowski, a diploma with distinction in 1995). He also finished the School for Arts Management at the University of Poznań (1994) and the postgraduate course in choral conducting at the Music Academy in Bydgoszcz (1996). He has been on the faculty of the Fryderyk Chopin University of Music since 1996. In 2000 he gained his Ph.D. in composition and in 2007 he received a habilitation degree. He worked as a visiting professor in Chile and Argentina (2003, 2006). From 2016 he is vice-rector of the Fryderyk Chopin University of Music in Warsaw.

He has received numerous commissions from Poland and abroad (Japan, Germany, Great Britain, Switzerland, The Netherlands) and has held many grants, including those from the Częstochowa Town Council (1991-1992), the Professor Bogdan Suchodolski Foundation (1995), the ZAiKS Authors’ and Composers’ Association (1996), the Arts Promotion Fund of the Ministry of Culture (several times) and the President of Warsaw (2010).

His honours include First Prize at the Composers’ Competition in Łomża (1988), an honourable mention at the Tadeusz Baird Composers’ Competition (1994), First Prize at the Warsaw Music Academy Competition (1994), Second Prize at the 2nd Young Composers’ Forum in Kraków (1994), Second Prize at the Adam Didur Competition in Sanok (1996), and Second Prize at the 27th International ‘Florilege Vocal de Tours’ Competition in France (1998). He won the ‘Fryderyk’ Awards of the Polish Phonographic Academy (2005, 2006), the Award of the town of St Quentin (for the best performance of a contemporary work) at the Concours Europeen de Choeurs et Maitrises de Cathedrales (2006).
He has received the Commander’s Cross of the Order of Polonia Restituta (1998), the award of the Mayor of Częstochowa for outstanding compositional achievements (1995), the award of the Rector of the Music Academy in Warsaw (2005) and the Saint Brother Albert Chmielowski Award for outstanding achievements in composition, conducting and organization of musical life (2006).
His works have been performed at over 100 festivals in Poland and abroad (Britain, Argentina, Belarus, Belgium, Chile, China, the Czech Republic, Denmark, France, Spain, Germany, Iceland, Israel, Italy, Lithuania, Luxembourg, Malta, Monaco, Moldova, Peru, Romania, Russia, South Korea, Switzerland, Ukraine, Uruguay, the Vatican and the United States). His discography includes over 100 CDs (Hyperion, Acte Préalable, Polskie Nagrania Edition, DUX, Musica Sacra Edition, Signum Records), one of which (String Quartet No. 1, performed by DAFÔ Quartet, DUX 0142) received the Fryderyk Award and six others were nominated for this award. Over sixty of his pieces have been published in Britain (ChesterNovello), Poland (PWM Edition), Germany (Edition Ferrimontana, Choris Mundi), Italy (Edizioni Carrara) and the United States (Lorenz Corporation). Almost all of his works have been recorded and broadcast by numerous radio and television stations.
He has served as the Director of the International Festival ‘Laboratory of Contemporary Music’ (since 1995) and as President of the Musica Sacra Association (since 2000). He is a member of the ZAiKS Association of Authors and Composers, the Presidium of the Council of the Phonographic Academy and of the artistic council of the Gaude Mater International Festival of Sacred Music in Częstochowa. He has sat on the juries of the composers’ competitions in Arezzo, Moscow and Bucharest. He is Artistic Director and Conductor of ‘Musica Sacra’ Choir of the Warsaw-Praga Cathedral and of the Musica Sacra Edition.
In recent years Paweł Łukaszewski’s music has gained a high recognition in Britain. His works have been performed (and some premiered) by such renowned choral ensembles from London and Cambridge as The Holst Singers, BBC Singers, Trinity College Choir, Tenebrae, Britten Sinfonia and Polyphony under the direction of prominent conductors Stephen Layton and Nigel Short. Two CDs devoted exclusively to his music have been released by Hyperion.