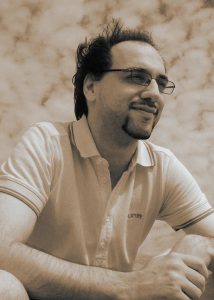 Simone Campanini was born in Parma (Italy) in 1977. He studied Organ and Organ composition with M° F.Tasini then with M° S.Innocenti at the Conservatory of Music “A.Boito” in Parma; in 1999 he won the third prize of the “G.Giarda” organ contest in Rome, reserved to the best organ graduates of the previous year.
In 2001 he attended a perfectionment course about Bach's organ music with K.Schnorr in Muenchen (Germany).
Since 1996 he is the main organist of the Parma Cathedral.
In 2007 he graduated cum laude in Electronic Engineering at the University of Parma,
then, in 2015 he received the PhD in Industrial Engineering with a master thesis about a software for the generation of virtual microphones from real microphone arrays.
Since 2004 he conduct the mixed choir of Corale “Citta di Parma” (of which he was previously a singer), a group that won many prizes in important international choral competitions (Arezzo, Gorizia, Tours): it was the activity of choir conductor that triggered his composition activity and “his” choir was the inspiration for many of his works.
In 2007 he partecipated, as organ soloist and as choir conductor, to the realization of a Baroque-Renesissance Music Encyclopedia for the japanese editor ICM.
As composer he was awarded in some national choral composition competitions (Sassari, Assisi, …), he won the 3rd prize at the 43th International Choral Composition Competition “Guido d'Arezzo” (Arezzo, Italy) and the 1st prize at the 5th International Harpsichord Composition Competition “W.Landowska” in Ruvo di Puglia (Italy) with a piece for oboe and harpsichord that was premiered by Giovanna Fornari and Christoph Hartmann, the 1st oboe of Berliner Philarmoniker orchestra.
Since 2008 he is a collaborator to the research activity of the acoustic group of the Industrial Engineering Department of the University of Parma.