Chorus for SATB Choir and Piano 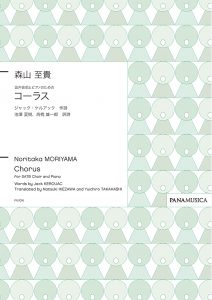 This is a work by young and popular composer, Noritaka MORIYAMA, screaming about the madness of unreasonable injustice of the world which is difficult to imagine from the title.Texts are from Japanese translation of American novelist, Jack KEROUAC,and the composer expressed the music with the styles such as Jazz and Blues because he was inspired by those words that were commonly used in the texts.It takes the both singers and listeners to the exciting world with piano sound which moves freely and chorus parts that sometimes hit their emotions intensely and sometimes languorously.